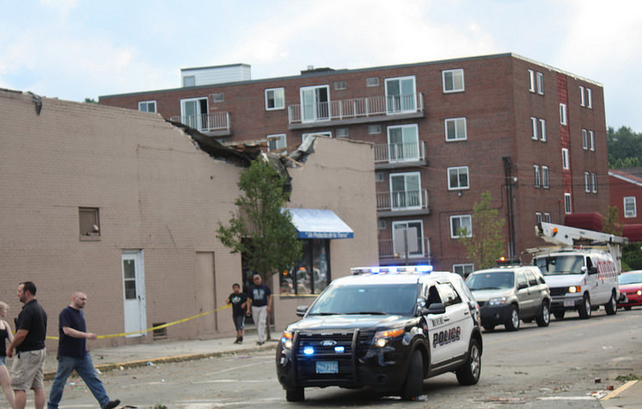 A major tornado hit the city of Revere on Monday, leaving a path of damages that included homes, cars and businesses. The fact that there were no lives lost by the first tornado to hit Suffolk County in over sixty years is certainly a miracle. The severe storm system which has left a path of damages back to the Great Lakes erupted into a tornado just on the outskirts of Chelsea and appeared to stay on the ground for approximately five minutes as it traveled north through the city of Revere.

There were early reports that as many as 100 homes have been damaged by the tornado and dozens of businesses were also damaged by strong winds, hail and heavy rains. Hundreds of trees were knocked over and many of these landed on cars and structures.

What started as a mild Spring in 2014, with no significant reported tornadoes in early 2014 has quickly changed as severe weather has been problematic in dozens of states this year. What is so unusual about the TF2 tornado that hit in the greater Boston area on Monday is that it hit in such an urban area.

Looking ahead, with over three square miles of damaged area, the recovery will be long and difficult. The first phase in the recovery is debris removal and inspection to all damaged properties to ensure that they are structurally intact and safe. Once this phase has been completed, then the rebuilding can begin. If we know one thing, its that Boston Strong is certain to recover from this and will come back better than before.