Not every flood is caused by hurricanes, as Texas found out the hard way over the last few days. Parts of Texas, notably Houston and most of Harris County have been deluged by a massive amount of rainfall, causing severe flooding in much of these areas. In fact it is estimated that 240 billion gallons of rain has fallen in the Houston area, and that estimate is expected to only climb from there, since the forecast has predicted rain well into Tuesday evening.

At least 5 people have died in the flooding in Houston alone, with some counts listed at 6 fatalities. Thousands have already been evacuated, and thousands of cars had to be abandoned by motorists who were foolish enough to try and brave the flood ridden streets and roads in Houston and the surrounding areas. Area officials have pleaded with people to not drive or take to the roads during this emergency, yet thousands simply ignored this plea, forcing emergency responders to answer desperate calls for help and putting first responders lives in jeopardy, not to mention eating away precious resources. Most of these fatalities could have been avoided, and most were found dead in their vehicles. Over 1200 water rescues took place as of mid day Monday. The majority of these rescues were rescues of people who did not obey public officials and keep off the road.

Thousands are still without power, and for the time being will have to wait it out until area utility companies can get a grip on the situation, which will not happen until the waters start to recede, which could take days. Sadly every part of Houston has experienced at least some level of flooding, if not catastrophic flooding. Over 1000 homes in Harris county are flooded, and reports are still coming in, so we fully expect the damage reports to only climb over the next few days. Rescuers have had to resort to using boats to rescue residents in flooded homes, as the waters are to deep for even the counties high water vehicles to reach the stranded survivors safely.

Part of the problem for Houston is its many bayous. Every single bayou in Houston was flooded to the top of their banks as of mid day Monday. Another problem faced by Houston is its very soft soil, which residents have taken to calling it “gumbo” soil. This soil is especially prone to water build up, as it does not drain very well. Another issue plaguing Houston is that the city could have helped prevent much of this flooding, but this work would have needed to have been started over 40 years ago to have any meaningful impact today. Houston has been called the worst city in the nation when it comes to flooding, and it has a recorded record breaking losses due to flooding. 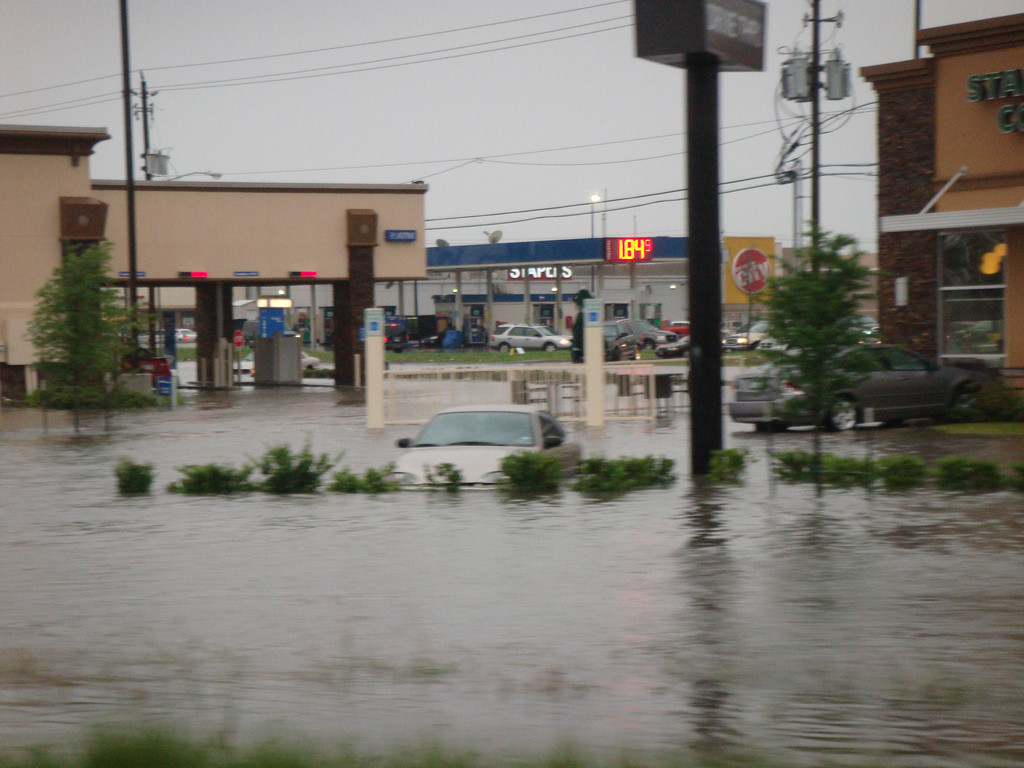 The flooding has impacted everything, even hospitals. Nine area hospitals closed their doors to new patients due to the flooding. More than 200 flights were also canceled as of Monday, with Tuesday faring not much better for local airports. At least 45,000 customers in the region were without power, but this is much lower than the peak, which was at one point close to 125,000 without power. This flood is the worst flood since Tropical Storm Allison in 2001. The damage and causalities left behind by Tropical Storm Allison would be hard to top, it left 41 people dead, and caused $5 billion in property damage just in Harris County, and that storm damaged more than just Harris county.