As Hurricane Matthew heads out of the Bahamas and moves towards South Florida, it is forecasted that it is going to be moving at a speed of 130mp/h, which is a low category 4 storm, which can cause a lot of damage. As the storm is predicted to hit Southern Florida by Thursday night, thousands of people have been ordered to evacuate their homes. Contractors were scrambling to board up properties and almost every large home improvement retail store was quickly sold out of wood and supplies. Evacuation efforts started on Wednesday night.

150,000 people have been ordered to evacuate Palm Beach County. This order affects mainly people who live in low lying areas or those who live in mobile homes. 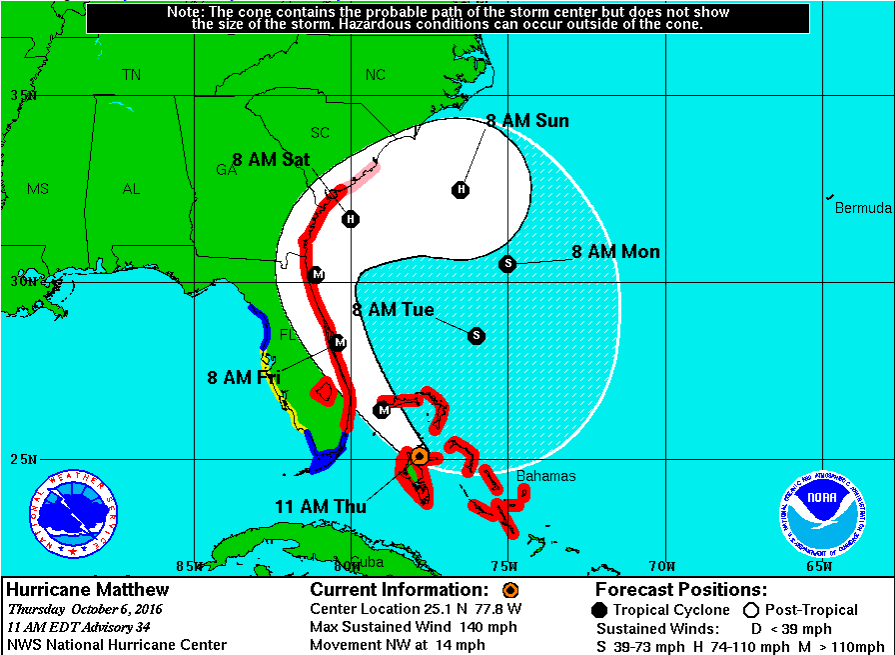 With the storm expected to intensify on Friday morning, residents are being urged by Governor Rick Scott to evacuate before it is too late since there is still time. Once the safety window is over, it will be difficult for the state to send people to help out individuals who may have refused to leave their homes before the storm hits.

There are voluntary emergency shelters that have been opened for residents who need a safe place to stay until the storm passes. All counties have emergency shelters, with some of them announcing a curfew starting from Thursday 6 pm to 6 a.m. on Friday morning.

President Obama visited the headquarters of the Federal Emergency Management Agency on Wednesday to discuss the measures that have been put in place in preparation for the storm. The president reported that there were supplies and response teams that have been positioned in Florida in readiness for the people, who are to be evacuated in Florida, Georgia and Carolina,

The major hazard that most people will have to deal with as the storm rages on is the strong winds, which will snap trees and uproot power poles even in residential areas. Houses which have a strong structure and frame should be able to bear the brunt of the winds without getting too much damage.

The evacuation efforts are directed inland, as far from the coastal areas as possible, therefore residents are urged not to go to Georgia or Orlando but to retreat inward.

Most of the shelters that have been opened in Florida are based in various schools. There are even special shelters for pets and for people with disabilities and people who have special medical needs. If you want your pet to be sheltered, be sure to carry along proof of vaccinations and licenses. The pets should be crated.