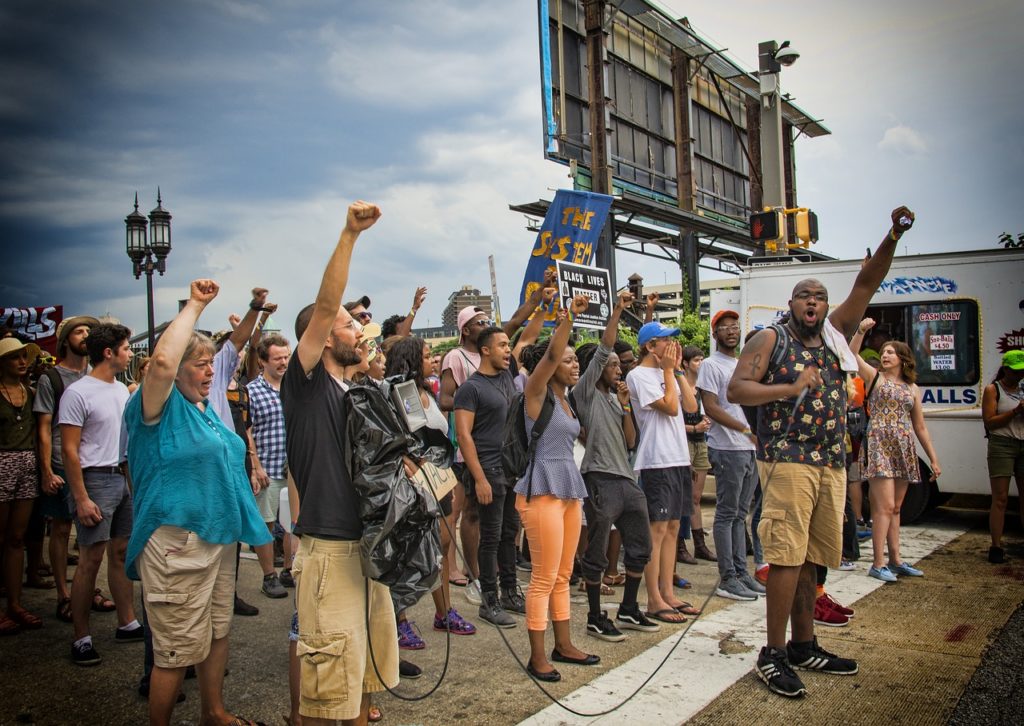 Bank of America’s customers in Santa Cruz were confused, perplexed and annoyed when they found the bank’s River Street branch closed and locked.

Taped beside the bank’s door, a handwritten placard read: “Despite our peaceful intentions, the bank chose to close. Just like they’ve chosen to support big oil.” On Thursday, roughly 30 men, women and children beat drums and shook rattles at River and Water streets.  The action was part of a global day of action to protest the Dakota Access Pipeline and the protestors carried signs that read “Water is Life” and “No DAPL”.

Thursday’s demonstrations in downtown Santa Cruz (which has many interesting sights and things to do) was because of a conflict occurring approximately 1,700 miles away where Energy Transfer Partners is building a 30-inch diameter pipeline that is 1,172-miles long and will be carrying 470,000 barrels of oil per day from North Dakota to Illinois.

The protests escalated in November 2016 when environmentalist activists started targeting financial institutions such as Bank of America that are backing the Dakota Access Pipeline. Led by members of the Standing Rock Sioux nation, Native Americans and their allies have been protesting the project for months and are urging supporters to boycott the banks. The activists feel that the pipeline would taint the water supply, levy an inequitable financial burden on the Standing Rock Sioux and desecrate ancestral lands.

As a result, Bank of America customers were forced to seek another branch, or use the ATM to do their banking on Thursday.

Protest organizer Nancy Park finds it unfortunate that the bank decided to respond this way to a peaceful protest. As it is the first of the month and people need to deposit their paychecks and pay rent and bills, the bank being closed makes it tough for everyday people.

Park explained that Bank of America’s corporate head office instructed the branch manager to not open the bank if any protesters were present when the branch was due to open. Bank representatives were not available for comment. Related protests occurred across the U.S. and it is not clear how many Bank of America branches did not open on Thursday.

In addition, global action organizers encouraged protesters across the U.S. to close their bank accounts at Bank of America and the other financial institutions funding the Dakota Access Pipeline.

Chief Blue Star Eagle of the Yankton Sioux Reservation discussed humanity’s “sacred responsibilities” to the environment. He also thanked protesters who had already closed their bank accounts at Bank of America and Citibank on Thursday. Blue Star Eagle added that it was time to do something about the hurt and wrongs that has been done to Mother Earth and to each other.

Park has had little experience with political actions before Thursday’s protest. She did however note that the events of Nov. 21 mobilized her. Police were accused of using excessive force on the North Dakota protesters on that night. Rubber bullets, concussion grenades, tear gas, pepper spray, and water cannons were allegedly used in subfreezing conditions. Park is outraged as feels it was inhumane. It did however wake her and a lot of other people up.

At least 17 people were hospitalized on Nov. 21 after approximately 400 demonstrators clashed with police at a bridge that was being barricaded by authorities.

According to Veterans Stand for Standing Rock, more than 2,000 U.S. military veterans will join demonstrations in North Dakota on Sunday to call attention to the violent way in which law enforcement treated the protesters.