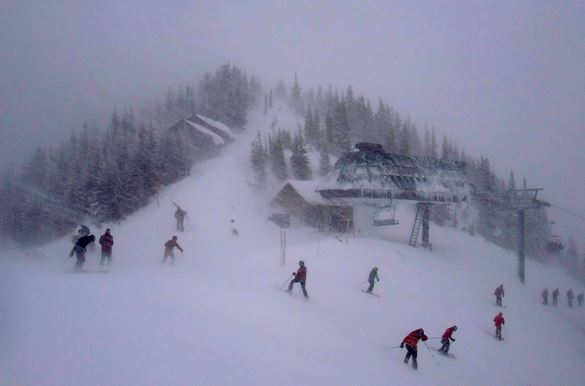 Millions of people in the United States from Montana to Michigan are seeing their first significant snowfall of the season as winter storm Astro is dumping several inches of white stuff on the ground. Up to 10 inches of snow covered the ground in parts of Montana by Monday evening and with heavy drifting due to high winds, snowdrifts up to 2 feet high enveloped roads and buildings. Freezing rain was also mixed in with the snow in some parts of Montana South Dakota, making roadways slippery and treacherous.

In some portions of western and central Minnesota, over 12 inches of snow were already on the ground as of morning rush hour Monday. The Twin Cities had a few inches of snow by early Monday morning with many more being forecast to fall before evening rush hour. Hardware stores in the Minneapolis/St. Paul area reported that sales of snow shovels were brisk with some people even buying two or more. Stearns County which includes the city of St. Cloud received a whopping 16.5 inches of snow by mid-day Monday. The heavy snowfall moved into the state of Wisconsin during the daytime hours Monday, dumping up to 14 inches in some locations there.

In Ironwood, located Michigan’s Upper Peninsula, 9 inches of snow was measured Monday afternoon. Forecasters warned residents of that county as well as others living in the UP that more heavy snow would fall Tuesday with some areas possibly getting over 20 inches. The National Weather Service said Monday that the lake-effect snow that will come down in northern Michigan could result in some areas seeing snowfall totals well over the 2-foot mark by the time the system moves out of the area Wednesday.

Nearly 400 vehicular accidents occurred in Minnesota Monday due to very dangerous roadway conditions. As of late Monday night, two people died as a result of car accidents on icy roads in that state. State troopers were very busy responding to the non-stop crashes and spinouts as of 7pm. The NWS said that the early evening snowfall total in St. Augusta and Cambridge, Minnesota was close to the 17 inch mark with more snow coming down. The wicked winter storm has forced dozens of school districts in Minnesota to call off classes for Tuesday. Many of those school closings could very well extend into mid-week or beyond.