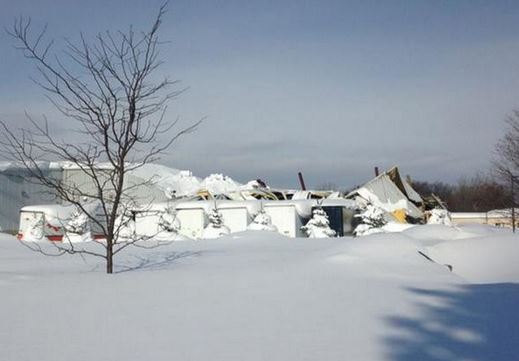 Snow and frigid cold temperatures have left thousands of residents of New York stranded in their homes this week, with more snow on the way according to the National Weather Service. Between 3-6 feet of snow has fallen on Buffalo, and it has caused weather-related deaths, and has also prompted emergency rescues all over roadways.

The reason for all of this is a lake-effect snow band that formed over Lake Erie on Monday night as the cold arctic air began moving over the warmer Great Lakes. This particular snowbelt set its sights on western New York and pummeled the area for about 24 hours. Communities along the Thruway, also known as I-90 have been trapped in their homes after several feet of snow fell on Tuesday.

When this much snow falls, there is a potential for roof collapses. The Erie County officials warned of this in a press conference on Thursday morning. There are many buildings in danger due to the excessive amount of snow. There is also a impending danger to mobile home parks as the heavy snow continues to weigh down the building structures.
City officials are urging residents to be smart, stay in their homes, and take heed to the driving ban.

I-90 was impossible to travel on, and emergency crews couldn’t even keep up with the 3-5 inch per hour accumulation rates. This snow was accompanied by high winds, which caused the snow to blow and drift causing white-out conditions. Even plow trucks were stranded in some communities, and the governor of New York then declared several counties in a state of emergency, allowing for the utilization of National Guard personnel.

On average, the northern and western New York areas receive more than 100 inches of snow during the winter season. This lake-effect snow event represents a large amount of the seasonal average, and it isn’t even December yet. Depending on the investigation of accumulation measurement, there is a possibility that the 24 hour United States snowfall record could fall. The record now belongs to Silver Lake, CO with 76 inches, spanning April 14-15 in 1921.

A report of 77 inches in 24 hours in Montague, New York was deemed not accurate and thrown out from January 1997. It may be possible that the amount of snowfall has reached this level, but the snow must be measured specifically in intervals for an official record to be set. Some of the fluffy snow may have had the chance to settle and compact before it was actually measured. Locally higher snowfall totals could possibly come about as more information becomes available. Due to the nature of these snowbelts, some areas may get completely inundated with snow while others only receive an inch or so and they’re only a mile away.

Unfortunately, another round of this lake-effect will develop over the already covered region on Thursday and will continue into Friday.