A new winter storm, hailed Winter Storm Damon, has been produced off of the East Coast, and is expected to deliver rain, snow, flooding, and high winds to the Northeast as we move into the week. The storms first target will be areas that were hit the hardest by Superstorm Sandy two years ago, and Tuesday morning’s high tide may even bring significant coastal flooding to parts of the Jersey Shore and Long Island.

This is all due to a small area of low lying pressure that formed along the western end of a frontal boundary on the Atlantic Coast. It will then surge on toward New England, but this will not happen overnight. Before entering New England, it will stall out over New York City on Tuesday night into Wednesday. As we near Thursday, the low will finally make its way to New England.

One of the largest challenges with this system is how much cold air will be available. Even though there was a spurt of cold air through the Northeast this past weekend, the path of this coastal low will dislodge the cold air from hitting the Northeast for a short period of time. 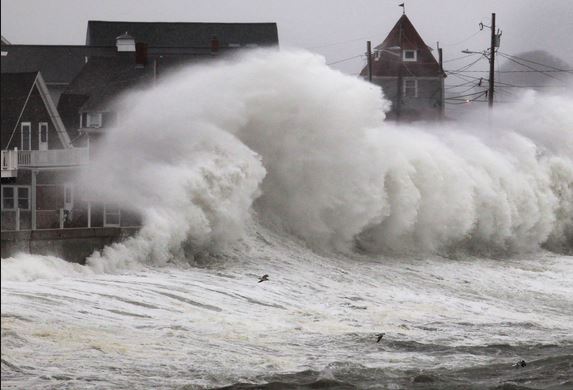 The biggest concern for Tuesday morning is for the late-morning high tide from the Delaware beaches to the Jersey Shore, and even Long Island. These areas are still under a coastal flood warning. Luckily for the residents that experienced damages due to Sandy, the National Weather Service states that the flooding will not reach remotely near to how high the levels were with that storm.

There is cold air in place right now, and it has the potential to track north into England, with the most precipitation being located at the I-95 urban corridor on Tuesday. This precipitation has the potential to be quite heavy in the coastal areas and in southern New England as well. The rainfall totals are expected to reach about 2 inches, which could lead to flash flooding in flood-prone areas. Flood watches have been established by the National Weather Service over much of Southern New England and into New Jersey, also including the NYC Tri-State area, Hartford, and Boston.

As we move even father into the week, the rain should change to snow and the cold air chills will be present over the I-95 corridor later into Wednesday. If any snow precipitation does occur, then it will probably be in Boston, New York, Philadelphia, and Washington D.C. The heaviest snowfall will be from the Northeast. This means northern Pennsylvania to New York’s Mohawk and Upper Hudson Valleys, Catskills, Adirondacks, Green and White Mountains, and Northern Maine, with about 6 inches or more likely in these areas alone. Some of the higher elevations may even see up to 2 feet of snow as we move through Thursday.

It is possible that this precipitation may mix and even change to rain. This rain could potentially be very heavy for a short amount of time in New England and Upstate New York. In addition to the heavy rain that these states can expect, there will be strong gusting winds as well. Some gusts may even range from 40-55 mph, and they will create a low pressure system throughout the Jersey Shore and New York area, then will move into Southern New England on Tuesday, and into Northern New England Tuesday night. As with all strong winds, power outages and downed trees are always a possibility with strong winds.