The upcoming Valentine’s Day weekend will be a very cold one in the Midwest as arctic air is pushing its way into the region from Canada. On Wednesday, an arctic cold front already brought wind, lake effect snow and bitterly cold air to the Midwest. This first round of wind, snow and cold is expected to last until Friday morning, according to the National Weather Service. The cold snap that will affect the Midwest on Thursday and Friday is only a primer for what is to come Saturday and Sunday which is brutally cold air that will plunge most of the region well below zero with dangerously cold wind chills. 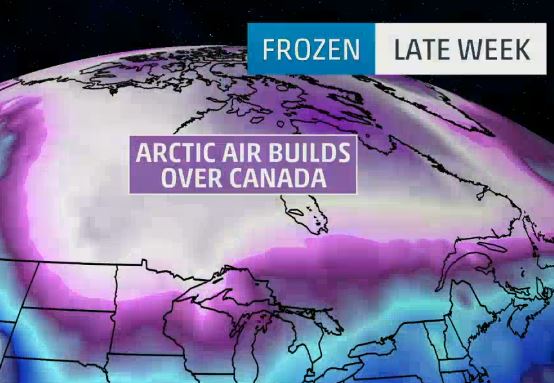 People living in the Midwest aren’t the only ones who will be affected by the extreme cold weather as those living in the Plains, parts of the south and Northeast will also experience bitterly cold weather. People planning weekend ski excursions and other outdoor activities may want to re-think their plans as the National Weather Service said Wednesday that it will be dangerous just to be outside as the temperatures struggle to climb into the double digits. And with high gusting winds, it will feel like it’s -20 degrees or even colder in many parts of the country, making it nearly unbearable just to step outside. People are being reminded to bundle up when heading outdoors and to not leave pets outside for longer than a couple of minutes. Homeowners are also being told to take extra precautions to avoid cold weather problems like furnace break-downs and pipe freeze-ups. The brutally cold temperatures are also going to affect those living in places like New York City and Boston where temperatures may break decade’s old low records.

The NWS said Wednesday that roads in the Midwest may become snow-covered and very slippery during this cold snap. The frigid air moving in will render most ice-melting compounds ineffective so anyone traveling should do so with extreme caution. Wind gusts of up to 45 miles per hour are possible in cities like Chicago, Detroit, Cleveland, Pittsburgh and Philadelphia which will make traveling all that more hazardous. The NWS also said that bands of intense lake-effect snow will develop over the next couple of days and especially downwind of lakes Michigan, Huron and Ontario.