The internet battle over regular cigarette smoking and e-cigarettes is growing bigger and stronger with each day and there are many things to consider in this battle, but the one that is most important is the user of course. People smoke, that is a fact and not everyone will just stop smoking, so giving them a less toxic alternative is always a good thing.

According to WebMD studies have shown that secondhand vapor from one brand of electronic cigarettes has less toxic chemicals the smoke from regular cigarettes. There are still some toxic chemicals inside of the vapor of course, but not as many as in regular smoke. Study author Arian Saffari says that findings indicate that: »generally speaking, e-cigarettes are safer than traditional cigarettes,« He goes on to saying: “we can still find some hazardous material in e-cigarette smoke and therefore we cannot leave e-cigarettes unregulated.”

The World Health Organization on one side has even called for a complete ban of e-cigs but another WebMD article talks about the critics of this ban where a group of UK tobacco and addiction specialists negate the ban on the grounds that the WHO report is riddled with errors, misinterpretations and misrepresentations. 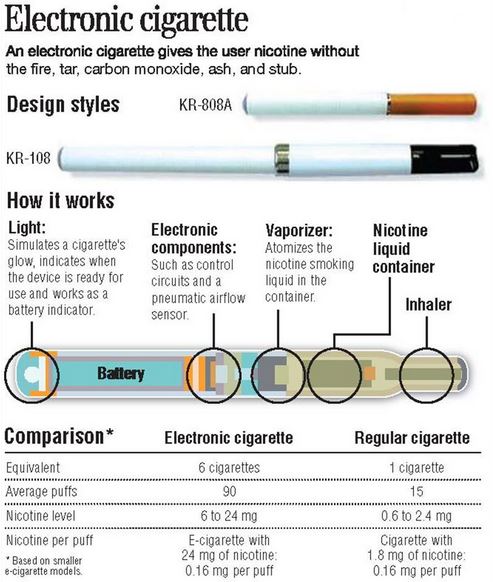 On the other hand many »vape« shop sellers say that e-cigs are an aid to quit smoking real cigarettes. And as it turns out it is not just them who claim this, british researches say that electronic cigarettes could save 6,000 lives per year for every million smokers. The researches argue that smokers die primarily because of tar and since e-cigs don’t have tar that these could actually be a welcomed mean to stop suffering caused by regular cigarettes.

And while most of the world still hasn’t decided on what to think of e-cigarettes, there is already a new hit on the market – vaporizers. Vaporizers resemble large fountain pens, with bigger batteries and cartridges, so they hold more liquid, produce larger vapor clouds and last longer. They also allow users, who often call themselves “vapers,” to mix and match hardware and refill cartridges with liquid bought in bulk.

According to Wall Street Journal vaporizer sales are growing twice as fast as e-cigarette sales and since this is a $2 billion market, this says a lot! Actually vaporizers are so hot that a handheld vaporizer marijuana vaporizer is going to be added to the 2015 Oscar gift bag!