Hurricane Odile made landfall earlier this weekend in the Baja California Peninsula of Mexico leaving behind a trail of devastation that left tens of thousands of people homeless. The powerful storm knocked down trees, powerlines and signs, overturned vehicles and left many homes uninhabitable. Odile has since weakened to a tropical storm but the threat of this system is far from over. The National Weather Service has five US states under flash flood watches including parts of Southern California, Arizona, Nevada, New Mexico and Texas. People living in those areas are being warned to prepare themselves for possible evacuation orders as Odile is expected to trigger widespread flooding that could be catastrophic. 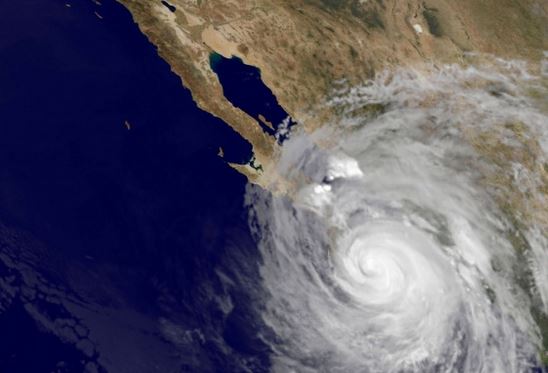 The NWS said Tuesday that the heaviest rainfall will most likely occur in Arizona and New Mexico where up to six inches could fall. However, local rainfall amounts could be in excess of 10 inches on the slopes of the mountains. This is the type of weather event that can cause rainfall to rush through dry stream and river beds, pushing it into populated areas very rapidly. Major roadways could become flooded and some bridges could be swept away. Mudslides and dust storms could block roadways in some areas.

The biggest threat to cities like Flagstaff, Phoenix, Tucson, Albuquerque and El Paso will be from Wednesday morning through Thursday. Odile is also threatening to dump a lot of rain further north and west wherein it could impact Las Vegas, Palm Springs and Salt Lake City. It was just a week ago that Hurricane Norbert caused record rainfall in Phoenix and Tucson where hundreds of homes sustained flooding and two people lost their lives. The additional rainfall being forecast from Odile is making residents of those two cities nervous as the ground in that region simply cannot absorb more water. Forecasters are saying that some flooding is inevitable from Odile across Arizona to West Texas by Wednesday.

Hurricane Odile became the strongest weather system since the late 1960s to hit Mexico’s Baja California peninsula, according to the US National Hurricane Center. Even though the hurricane has weakened, it is a large tropical storm that is carrying a significant amount of tropical moisture as it moves into the Southwest. People in the Southwest are being told to brace for possible severe flooding as the system inches its way northward. Forecasters are reporting that 4 to 6 inches of rain could fall in parts of Arizona and New Mexico Wednesday and Thursday. To put that into perspective, it took less than 3 inches of rain to cause historical flooding in Phoenix earlier this month.